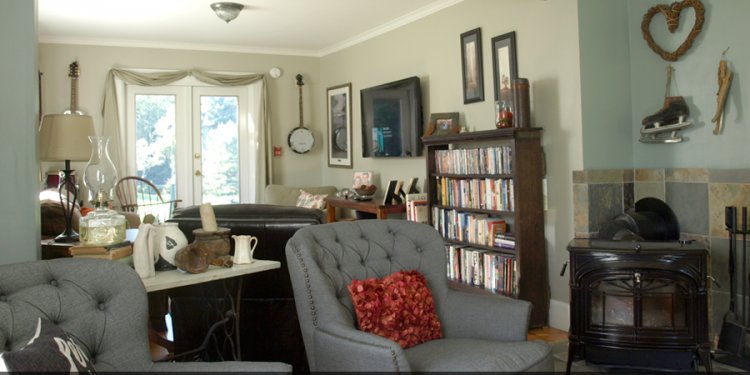 Places to Stay in Woodstock VT

Local food reigns supreme in this postcard-perfect New England town. These are our favorite places to eat in Woodstock.

It’s a New England village out of central casting: Over here, Gillingham’s, the 200-year-old general store with creaky wood floors, penny candy, hunters’ plaids, and local artisan cheese (this is Vermont); just beyond that, a covered bridge spans the Ottauquechee River. The white-columned, Rockefeller-owned Woodstock Inn commands the town green like a grand dowager, though the old gal isn’t actually that ancient, having been rebuilt in 1969 and refurbished several times since.

Courtesy of The Lincoln Inn & Restaurant At The Covered Bridge

Four miles down Route 4, next to yet another covered bridge is a more modest, though equally iconic white-clapboard farmhouse, home to The Lincoln Inn and Restaurant. Since its new owners, Mara Mehlman and Jevgenija Saromova, took over in 2014, the inn has established itself as a foodie hotspot, building on Saromova’s training at Michelin-starred restaurants in Italy, England, and France, and her love of seasonal, inventive and precisely—even geometrically—plated food.

The setup here is more Rockefellerian than homespun: Dinner is a prix fixe, four-course, ever-changing feast, one seating per night. But at $55 (plus drinks, tax, and tip), it’s a reasonable splurge for food of this quality; freshly made rolls; house-cured gravlax served with a Bloody Mary sorbet; lamb osso bucco (Saromova has a particularly deft hand with lamb); a terrine of beets, basil, and tomato pressed to form a glistening block, thickly sliced; a dark chocolate tart served with Cointreau ice cream. Stay for the night in one of six guest rooms; this is Woodstock at its most urbane and cozy.

Woodstock’s own kind of diner—come for the VerMonte Cristo sandwich served with maple syrup (.95 and big enough for two) and stay for the mile-high apple pie with Cheddar (.15). Cash only.

Deirdre Heekin and Caleb Barber revolutionized the local dining scene with the 1996 opening of their bakery/café serving breads and sweets they learned to make while apprenticing in Tuscany. The bakery later became a full restaurant and osteria (wine bar). But as they’ve devoted more of their time to their farm and winery operation, charmingly named La Garagista, restaurant hours have scaled back, so check the Web site and plan ahead. You’re still in for a treat: local lamb loin stuffed with chèvre, rosemary, and garlic; handmade pastas; and wonderful pizzas (don’t miss the orange and olive combo). Meat entrees from $22.50.

If only every town could boast an indoor market so crammed with the finest local cheeses, breads, produce, chocolates, and jams. This is a can’t-miss stop for hikers or skiers in search of a picnic lunch and a great place to take the pulse of the ever-bourgeoning Vermont-made food scene. Sandwiches from $6.59.

True farm-to-table dining in an airy post-and-beam building on the grounds of a family-owned beef and poultry operation. True to its name, the views are lovely and all the meat and produce comes either from on-site or local farms, such as the Cloudland sirloin with local squash risotto or carrot flan with local greens and chèvre. The more casual Friday 3-course menu is $39; the white-linen Saturday treatment goes for $47.

Where to Stay in Woodstock VT?

Romantic Places to Stay in Vermont