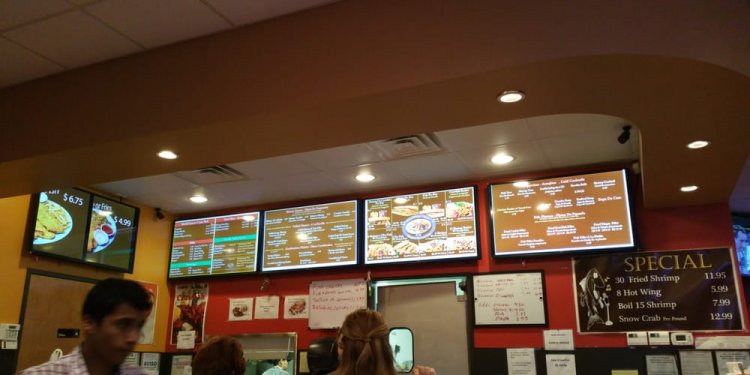 The 10th Annual Egypt fest is happening Saturday, June 13th in the Journal Square plaza. A few weeks ago I met with Ahmed Shadeed, the brain behind this amazing yearly event to get the background scoop on all those in the community who are involved (post coming soon).

While I was getting to know Ahmed Shadeed who is now a new friend, I asked him if he could take me to his favorite food/hangout spot. I was sincerely craving some good middle eastern food. He told me about the Marina Seafood Restaurant, he said it was his favorite place to eat in Jersey City.

Middle Eastern food is by far one of my favorite cuisines (I am Israeli after all) so I was beyond excited to try this place out! We met him on a weeknight and the place was filled with people… from families with kids to a group of guys on a “boys night out”.

We let Ahmed order for us so he got some salads, tahini sauce, an eggplant dish, fried calamari and hummus (chickpeas!!) to start with.

YUM. The Calamari was so good!!

Then it was time for the main course, a whole grilled fish! Delicious. Now just so you are warned, the fish comes whole, so you have to get down and dirty to eat it. Another thing worth mentioning, Ahmed told us that you need to remove the stomach from the fish, that you shouldn’t eat it so ask the waiter to help you if you don’t know how. Otherwise go crazy!

During our dinner, a few of Ahmed’s friends came to join us, and one of them gave us a little background story on the restaurant…

What’s your name? Marwan Abdel-Rahman. This restaurant has an interesting history. It was originally owned by another Egyptian guy by the name of Hassan, and he was from the city called Cusae, that’s a Mediterranean city which is famous for, specifically, the seafood cuisine and dishes. And Hassan was so successful that people from around the East Coast drove here to come and eat here. He received good reviews from the New York Times and other food critiques.

And then it seems that Hassan has left the country and these folks brought the place and they’re doing just as good. It’s a political hotspot.

What do you normally order here? Fried fish with certain sauce, you know it’s a garlic sauce and tomato with a brown fried rice and seafood soup.

What about like salads? Sometimes a green salad or a tahini salad.

It was such a fun dinner, Ahmed is hilarious, he was telling us so many funny stories! Most importantly we were stuffed.